Hello and welcome to the Colorado Mineral & Fossil Show, set in the beautiful landscape surrounding the city of Denver, Colorado, USA.

This show is organised by Marty Zinn (of MZExpos) and is held in its usual hotel, although this year the name of the hotel has changed from the Holiday Inn, Denver Central to the Ramada Plaza Hotel (4849 Bannock St., Denver, 80216 – 1813). 200 dealers from around the world exhibit at this event every year, many regulars and always a few new, bringing their newest specimens to show keen mineral collectors and competing dealers alike. The show is open to the public until Sunday the 16th of September 5pm and dealers usually open their doors at 10am. 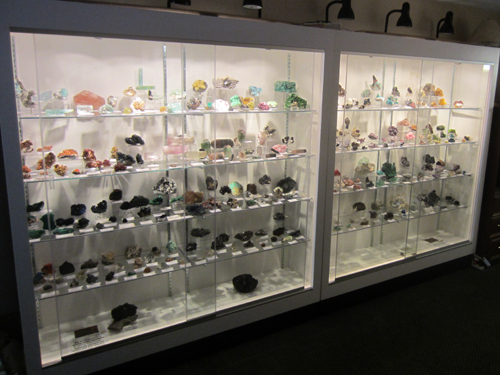 This year the Kristalle and Crystal Classics team includes Wayne & Dona Leicht, Lois Nelson, Tana Daugharthy, Robbie McCarty, Dave & Liz Hacker, Dave & Audrey Lloyd, David Spiller and Ian Bruce & Diana Schlegel. Wayne and Dona and the rest of the gang arrived early at the show to set up and were ready for a jump start opening on Monday morning. We have one retail room – Room 133 – in which we have three display cases with fine mineral specimens from all corners of the world. Here is just a small selection of some of the highlights we have on display. Should you be interested in any of our specimens, please do not hesitate to contact us, members of our team are always more than willing to assist. Enjoy…..

Once the show was fully open it was time to look around and check out what other dealers had to offer. The first room we entered was the Collector’s Edge just across the hall. Situated on the outskirts of Denver in Golden, this show is but a stones throw from their home and convenient for the guys at the Edge. The Collector’s Edge showed us some important specimens from Inner Mongolia, a selection of African minerals as well as a nice mixture of worldwide material. Here are some of them:

The next stop we made was to Brazilian dealer Vasconcelos. They had new Kyanite specimens from São José da Safira, Minas Gerais, Brazil. These were found earlier this year but all the specimens were covered in Quartz. As it is a time consuming process to remove the Quartz and expose these fabulous blue blades of Kyanite, this is the first major mineral show that the specimens have been shown at.

Another spectacular specimen that caught my eye was this 30 cm Quartz crystal with a deep blue Apatite on one face. This is from the Golconda Pegmatite, a classic Brazilian Apatite source famous for its rich blue and lilac coloured Apatite crystals.

Onto our good friend Jon Voelter of Voelter Minerals. Jon has bought several mineral collections over the last few months which included specimens from England, Germany, Africa and other worldwide localities. We really liked the German grassy-green Pyromophite and this particularly gemmy Grossular Garnet from Quebec, Canada.

After a chatting with Jon, it was time to move onto the next room. Joseph Dorris of Pinnacle 5 Minerals and Glacier Peak Mining presented his newest find of Amazonite and Smoky Quartz specimens collected with his son Tim earlier this year. The last two mining seasons have been exceptional for them and the pegmatite structure they are excavating has produced some of the most incredible turquoise blue Amazonite crystals seen so far from this location. Joe and Tim are only able to mine for a short period each year, firstly because the mining itself is very costly and secondly the specimens take a long time to prepare before they are ready for display. Despite a number of setbacks this year, these guys managed to get some fabulous specimens out of the 992 pocket. Here are just a two specimens of Amazonite, Smoky Quartz and Cleavelandite from the 992 Pocket, Smoky Hawk Mine, Florissant, Teller Co., Colorado, USA. 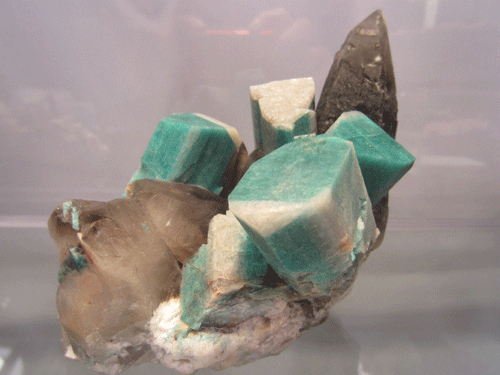 As well as the intense coloured Amazonites, they also found Fluorites and single Smoky Quartz specimens. Joe believes they have just one more good season ahead next year before they finish mining the current structure.

My next port of call was Nathan Romano from Explore Minas, owner of this company since 2001 and who lived in Brazil for 12 years. Earlier this year Nathan was able to purchase the terminated crystals from a small find (5 Kilos) of bi-coloured Tourmaline. Some of the material was immediately sold to a Chinese buyer as gem rough for cutting . The remainder is here for us to see. The colour spectrum in these crystals ranged from all shades of green, to brown, blue, pink, and yellow, and all had an amazing lustre.

That is all that we have time to post from the Colorado Mineral and Fossil Show. Soon it will be time to get the Denver Gem and Mineral Society ‘Main show’ off to a start and we will be back with our second show report. So stay tuned…more from the world of fine minerals to come.