Welcome to the 46th Annual Denver Gem and Mineral Show.

The Kristalle and Crystal Classics team arrived on Friday the 7th September before the optional jump start of Marty Zinn’s (MZExpos) Colorado Mineral & Fossil Show at the Ramada Plaza Hotel. We never know what to expect from the weather in Denver, it can be very changeable at this time of year. This year we were welcomed upon our arrival with a record heat wave and temperatures that Denver has not experienced for more than 200 years – up to 100 degrees F or 38 degrees C.

As usual we brought a great selection of minerals from all over the world, including a huge variety from Tsumeb, Namibia. Our room, 133, was set up by Saturday the 8th September and we were ready for business with four display cabinets filled with a fine worldwide specimens and books, and two drawer units of mineral cuties. 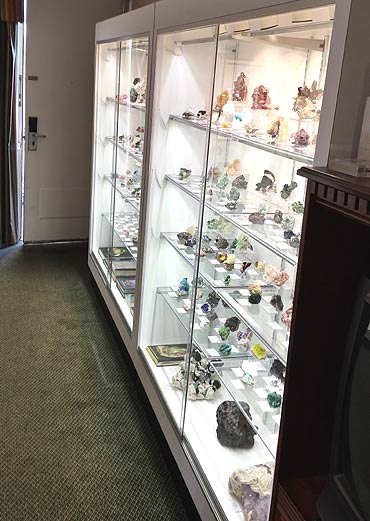 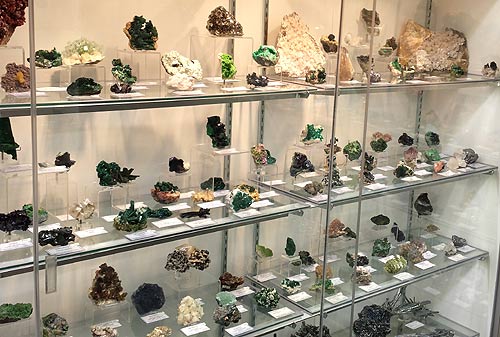 As the heat wave continued we had our first look around the Ramada for anything new to hit the mineral world. Since the show did not officially open until Wednesday a lot of dealers had not yet arrived, and there were not many people around. We did however manage to see the first of the new finds at the show – new Pyrite specimens from Colombia in the room of Cornerstone Minerals, discovered earlier this year in April.

The weather continued to be hot with high humidity until Monday afternoon when heavy dark clouds began to appear and quickly covered the sky. We realised something was about to change.

Following the big storms of Monday, Colorado was in for more bad weather with the rain getting worse. The skies continued to open and Colorado experienced the heaviest rain falls recorded for more than 50 years. Floods closed roads and washed out entire cities such as nearby Boulder. Within one week this area of Colorado had as much rain as it normally has in a year… Never the less, everyone had to continue with the show and thankfully our journeys to and from the show were not badly affected.

Once the Colorado Mineral and Fossil show as fully open on Wednesday, several more new finds were on display. One such spectacular new find was released by RIL Inc. and Great Basin Minerals. Over the last 18 months these guys have been working under extreme conditions at the Rowley Mine in Maricopa County, Arizona. They dug a new 300 foot adit and retrieved the finest Wulfenite and Mimetite specimens so far known from this locality. The colour ranges from bright translucent honey yellow to a rich fluorescent orange.  Amazing pieces from an old time favourite location.

Just to make the find even more incredible, there was a bonus – some great specimens of Diaboleite!

Keith Wentz (President of RIL Inc) was very proud of the achievements of himself and his team at the Rowley Mine, however they came at a price. A few members of his team including Keith himself had to be hospitalized with the effects of lead poisoning. Despite the cautious use of face masks and breathing apparatus and the utilisation of pumping machines to help oxygenate the air in the adit, the high temperatures exacerbated the problem and a number of the team succumbed to the effects of the poisoning. A stark reminder to us all about the hazards of mineral collecting!

Another new find at the show this year was from the Deccan Traps volcanic province of India, courtesy of the Matrix India team. Local miners were digging a water well and at around 30 feet deep they came across a cavity lined with Stilbite and green Apophyllite. The flat terminated Apophyllite formed hemispherical aggregates of radiating crystals beautifully contrasting with the white Stilbite. 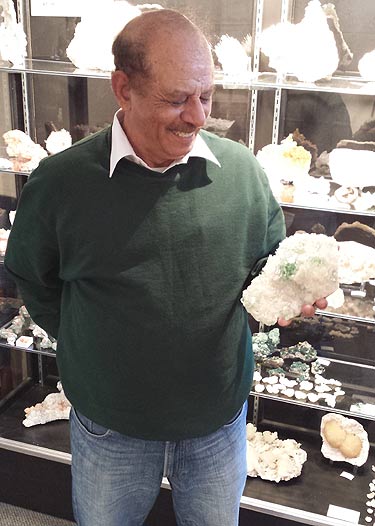 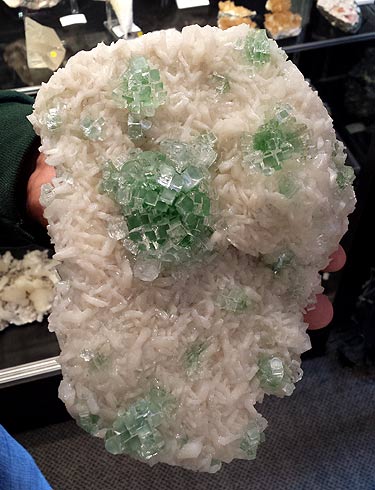 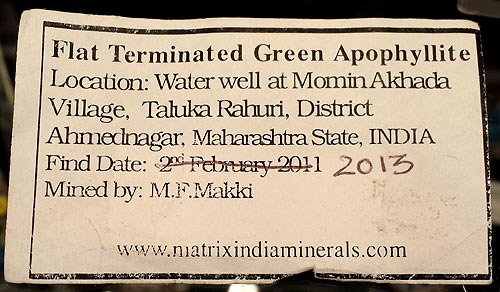 On Wednesday night we were invited to the Colorado School of Mines in Golden, very pretty little town a few miles west of Denver city and close to the mountains. The School of Mines organises an event each year in conjunction with the Mineral Show. As well as their own wonderful collection on display, they have a special collector’s display area. This year Safaa and Richard Jackson (of the Collector’s Edge and local residents) were featured with a selection of specimens from their personal collection, as well as well known collector and show organiser Marty Zinn.

One of our favourite displays at the Colorado School of Mines was this cabinet filled with faceted gemstones and a beautiful Tiara – the Miss Colorado Crown has 613 stones consisting of Diamond, Zircon, Sapphire, Ruby, Amethyst, Elbaite Tourmaline, Peridot, Topaz, Citrine and Garnet. The crown was created by Molberg’s House of Jewelry and is on loan from the Rocky Mountain Jewelers Association.

After this very enjoyable evening our team had an early start on Thursday morning for set up at the Denver Gem and Mineral Show at the Merchandise Mart (fondly called ‘the Main Show’). Thick grey clouds were hanging over us all day and the rain never seemed to stop. Luckily we were able to use a loading bay to unload our cabinets and minerals directly from our truck, and we stayed mostly dry during the unloading process.

Displaying specimens to their best effect is one of the most time consuming processes in setting up at a show, and there is definitely an art to it. After a long day we are finally ready and our cases were filled with all the fine minerals we had brought to the show.

Here is a brief selection of the minerals we had on display (if you see anything that takes your fancy, please contact us to find out more details on this or a similar specimen!)

Last but not least we had this amazing new find of Gold specimens from Eldorado Co., California, USA. A young prospector searching for Gold over the last five years, using a metal detector, discovered these specimens and Wayne had the chance to acquire some of them shortly before the Denver show. Discovered near Georgetown, not far from the Eagle’s Nest Mine in Placer Co., this Gold is found in the same formations as the Eagle’s Nest Gold specimens and has to date produced crystals up to 1″ long. Both specimens pictured below are very well crystallised and exhibit flattened octahedral crystals.

Each year the Denver Gem and Mineral show has a special theme, and this year’s theme was Tourmaline with many brightly coloured displays.

It was difficult to focus only on the special displays at the Show when so many of the dealers had such great specimens to offer. As is the norm, it is impossible to show you everything, so here are just a few of highlights:

Evan Jones from Unique Minerals had, as always, a fabulous display of Milpillas Azurites in his room. They were displayed with this complete set of polished Variscite slices from Clay Canyon,Utah – a real treat for the eyes.

Also in the Unique Minerals booth was this great Legrandite from the Ojuela Mine, Mapimi, Durango, Mexico.

Stephanie and Robert Snyder from Stonetrust also had a great selection of worldwide minerals on display.

With these pictures we say goodbye and hope you enjoyed our show report. Our next report will be from the Munich Show (Mineralientage) at the end of October, in Germany. This year the Munich Show celebrates its 50th Jubilee with a special exhibit of Gold from the best private collections and Museums from all over the world. We can’t wait!

Thank you from the Kristalle and Crystal Classics team.