Welcome to the second show report from the Tucson Gem and Mineral Show, 2013.  In this report we will include some of the great specimens we currently have on offer at the show, as well as what’s about at the Arizona Mineral and Fossil show at the Hotel Tucson City Center (formerly known as The InnSuites) including exciting items new to the mineral world. But first, venturing about 2 miles down the road we entered the Ramada Inn Show which has a predominance of wholesale bulk purchase minerals together with fossils and other artifacts.

Back outside, in the driveway servicing the Ramada there are rows and rows of tables, some covered with Rock crystal Quartz specimens from Arkansas, others with Amethyst, Smoky Quartz and an assortment of other materials all available for either bulk buy or individual purchase.

Back to the Hotel Tucson City Centre, most of the wholesale rooms and some of the retail rooms are now open for business. One of my first ports of call was John Cornish’s room. As ever John was his smiling welcoming self and we chatted for a while over a few of the pieces he had in his cabinets. He had a several British specimens that took Lloydy’s gaze but the specimens that caught my eye were some remarkable small Rhodochrosites from China. So much so I had to add one to my collection. Here is one of the better specimens John had:

The specimen measures about 2″ (50mm) across with individual crystals around 8mm across. Each crystal exhibits a near discoid shape outline. From the side the crystals appear as sandwiches of pale pink Rhodochrosite with a rich deep reddish-pink filling. It doesn’t stop there. The flat surfaces of the crystals show a kind of schiller as you catch the light on them. I can only imagine this is caused by a submicroscopic growth of shallow parallel terminal faces. Some of these are then dusted with a little manganese oxides which further enhances the appearance. John had only a few of these cuties, so if you’re as fascinated by these as I was you’d best get in there soon.

John also had this superb Arsenopyrite specimen, again from China:

Joe Dorris at Pinnacle 5 Minerals had his usual display of great Amazonite and Smoky Quartz specimens:

Pinnacle 5 also had these new specimens of blue Cleavelandite (and one pink!):

Tom Praszkier of Spirifer Minerals had some interesting Polish minerals including these polished slices of “Schalenblende” – banded Sphalerite, Galena and Marcasite from Olkusz Mine, Olkusz District, Małopolskie, Poland.

Tom also had these specimens of Baryte and Marcasite, again partly polished to show the attractive internal structure:

One cabinet in Tom’s room was devoted to specimens of Corundum in matrix from Madagascar, notice the “skin” of Feldspar around the individual Corundum crystals on a lot of the specimens.

Tom had this solitary Linarite specimen on one of his shelves from an unusual location:

As ever the guys at Collector’s Edge had a few spectacular exhibits, and we can’t complete this report without a mention of two exceptional Calcite specimens they had from China.

Last year I gave a mention to the team at the Adelaide Mining Company who each year bring a spectacular display of Crocoite specimens. Then, Adam Wright had told me they did not have their full display due to the damage of many specimens in transit. Thankfully this year no such catastrophe had happened and the display of specimens, a lot of them recently mined, was a feast for the eyes. I took many photos in their room, I just couldn’t resist, but unfortunately I don’t have space to show you them all. Here are just a few – the first is not one of the largest specimens in Adam’s showcases but, well I don’t need to say why I really wanted to include this one:

One of my favourite dealers is Luis Burillo. Luis always has a range of good quality specimens at reasonable prices. This year he had a selection of great Bournonites from Bolivia. Here is one of the better specimens with a particularly fine cluster of interlocking Bournonite “cog wheels” on matrix from  the Viboras Mine, Machacamarca District, Potosí Depart., Bolivia. The specimen measures around 5″ end to end.

Luis also had this well developed Löllingite specimen from China:

The doors to our Retail room opened promptly at 10am on Saturday and we soon had an influx of prospective customers eagerly looking for that specimen to add to their collection. 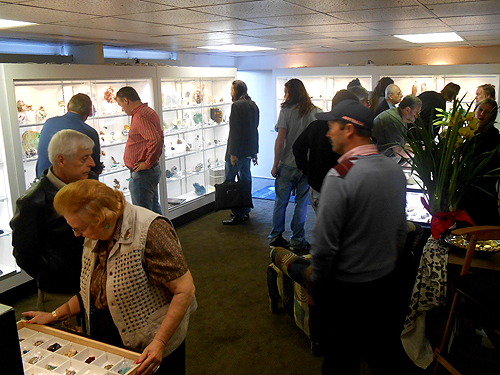 Here is just a taste of some of the fine mineral specimens we have on offer in our retail showroom:

We hope this offering is enough to keep you interested for our next instalment, when we will bring you some more goodies from the Hotel Tucson City Centre in a few days time. Until then, Happy Hunting!