Hello again from chilly Tucson for a look around the Westward Look Fine Mineral Show. The show has been very well attended with lots of visitors and crowded car parks especially on the Open Day Friday and Saturday.

We featured photos of many specimens on display in our room in our last report (please read it by clicking here) particularly focusing on the wonderful French specimens of the Gilles Emringer Collection. Here are a few pictures from other collections:

Around the show there was lots to see, with the high quality specimens expected at this top Mineral show. This year there seemed to be an abundance of superb new Chinese specimens from currently very active mining areas such as Huanggang, Inner Mongolia. There were also many superb Amethyst/Smoky Quartz specimens from the Goboboseb Mountains in Brandberg, Erongo Region, Namibia, with rich colours and excellent gemminess and some quite large sizes. In addition good Mt Malosa, Malawi specimens were present, and several dealers had new Dioptase from the DR Congo.

Our first stop was the Red Gallery and E-shop Mineralien, who had a selection of large Wulfenite crystals, mostly single crystals without matrix, from Onderra, Kaokoveld, Namibia.

On to The Sunnywood Collection, who always have a wonderful display with their custom made bases.

Watzl Minerals had their usual superb range of specimens including two of the new Crocoite specimens from the recent find at the Adelaide Mine in Tasmania, Australia. The new specimens have thinner crystals giving a hairier appearance. Adam Wright from the Adelaide Mining Company was one of the guest speakers at the Sunday Evening Program and gave an excellent talk about the recent activity at the mine. The thought of shipping these is just scary, and as you can see the specimens are left hot-glued to a lid over which a container is fitted to ensure the safety of the delicate crystals.

On to the Gobin’s room…

The Gobins had many specimens of Pyrite on Hematite from Elba Island, Italy. These are from a new find made last summer. Prior to this it was many years since specimens of this quality were found. Specimens from this find were available at the Munich show last year but these new Pyrites have a better lustre. Pyrites from this location are very distinctive and have sharp pyritohedral form.

Something which is all the rage at the moment is ‘Mineral’ Wines. Coghlan Vineyard and Jewelers of Los Olivios, California were tasting their award winning wines in Pala International and Wayne Thompson Fine Minerals’ room. The labels of their different wines feature images of Diamond, Ruby, Diopside, Sapphire and more. 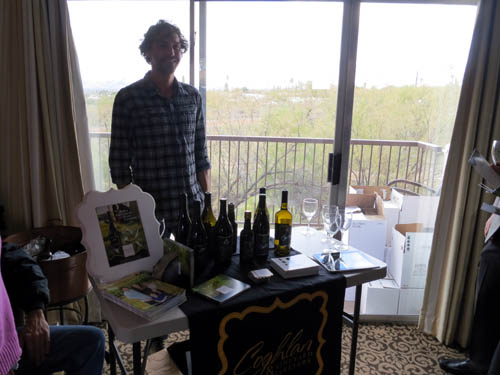 Pala had several specimens of very nice new Dioptase specimens from Mindouli, Demographic Republic of Congo. These specimens were found 3 months ago. There was another pocket found 2 weeks ago, but that specimen unsurprisingly had already sold.

Mineral Masterpiece always have aesthetic specimens. Tom Spann had time to show me a few of the new and interesting specimens. He had several new pieces from China including these stacked ‘poker chip’ Calcite specimens with Lollingite. The Calcites are thought to be pink from the presence of Manganese. These specimens have come out in the last year from Huanggang, Inner Mongolia which is very active at the moment. Lollingite specimens from this location were one of the ‘new’ finds at Ste Marie last year (2012).

Huanggang is also producing colourless, and often very gemmy Fluorite specimens. The Fluorites range from sharp octahedral form to modified octahedrons with flattened points (cube face) and edges. Tom noted that the sharp octahedral crystals tended to be the gemmiest, often water clear. The specimens he had were large crystals for the type.

Tom also had this very cool geode-like specimen of Jamesonite in hair-like crystals with Galena from Cavnic, Romania

The Miner’s Lunchbox were exhibiting some new specimens from China, also from the Inner Mongolia Region. This Lollingite accompanied by green Scheelite was from the Bayan Obo District.

Continuing in the theme of Chinese minerals was this large Fluorite from Shangbao, China, seen in Wendell Minerals’ room. About 30cm across, the Fluorite had an attractive colour of deep purple with a partial overgrowth of green. Shangbao is well known for its Fluorite specimen of different colours and forms.

Great English specimens always get a mention in our reports and this is a superb Baryte specimen from Mowbray Mine, Frizington, England, tinged red by Hematite.

Kyanite is a common metamorphic mineral, but is not often found in attractive large crystal specimens. This piece was particularly nice with a large bladed crystal of deep blue colour and high lustre. Brazil produces some of the best specimens of Kyanite.

Wendell Minerals also displayed this gemmy sceptre of Quartz with splashes of Amethyst and Smoky from the Goboboseb Mountains, Brandberg, Namibia.

On to Mineral Classics room:

Mineral Classics also had several excellent and quite different Cerussites from Tsumeb.

Mike and Sally Bergmann of Mike Bergmann Minerals are lovely dealers to have a chat with. They had an Amethyst from the Goboboseb Mountains, but in a different style with several Quartz crystals with Amethyst top sections, unusually still on matrix in a vug, accompanied by green Prehnite. A very attractive piece!

Tucked away at the back of the room, Mike had two killer Rhodochrosite specimens from Sweet Home Mine, Colorado. Both were large pieces, covered in bright pink rhombohedral specimens. They were old timers, which Mike had recently acquired, but had never been properly cleaned. They will be magnificent once finished!

As a compliment to the mineral specimens, the Bergmanns sell a wide range of old mining memorabilia, including mining lamps and tools. Mike said that in the last year they have had a huge jump in sales as it has become very popular for collectors to buy a few pieces to include in their display cabinets with minerals, and they certainly give the right atmosphere. 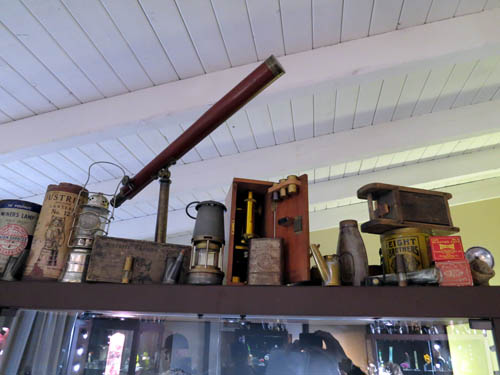 On the Saturday, the Westward Look Show has Collector Day, where one special guest displays their personal mineral collection in the front lobby from 10am to 4pm. This year’s special guest was Kevin Brown with his collection of USA minerals. Kevin has been collecting minerals since the early 1980s, but decided to focus purely on USA minerals from 1997 – partly because many of his favourites pieces were from the USA and he wanted to create a niche collection, and partly to not have to compete with other collectors for the quality worldwide specimens. He has specimens from every state, although as he said, some states are a little more aesthetically challenged than others. The specimens on display were just a portion of his overall collection. And the display was definitely worth a look – there were many superb examples of American classics, plus unusual specimens which show that great quality specimens can come from unusual places. Kevin collects all sizes, with the aim to collect the best quality piece possible. 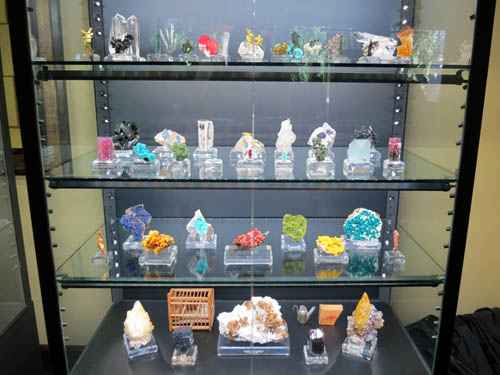 Here are a few closeups of the specimens:

We are now busy packing down the Westward Look and Hotel Tucson City Centre shows, ready to set up at the Tucson Gem and Mineral Society ‘main show’. We will bring you another report from the main show with highlights from our booth, around the show, and of course the special exhibits – this year’s theme is Fluorite!