THE man with the film camera, Bryan Swoboda, was our guest for a few days. A year ago we started a project with him and this recent visit should finish it. Bryan has done a film of Wayne’s vast library with short interviews with Wayne discussing some of the important works and about collecting rare books in general.
We felt the library should be documented because it is one of the more important in existence. Most of you know Wayne’s passion for old books. We have had a librarian (Lynn Lewis formerly with the GIA library) working two days a week for the last four years to catalog the collection. She has held every book of the over 6,000 volumes and has noted condition, values, special notes about important ex library holders, signatures, etc. Basically, everything anyone would want to know about a particular book.

For those not familiar with Wayne’s library, it consists mainly of early works on mineralogy,
gemology, California gold rush, western exploration and the Bideaux Arizona history library (which Wayne was able to complete by finding the extremely rare 7th edition of the Distrunell map used for the Treaty of Guadalupe Hidalgo negotiations in 1848 – the “Hope Diamond” for the Arizona collection). Wayne’s gold rush library is rich in original letters, maps, and misc. memorabilia (much of which was used in the state tour surrounding the sesquicentennial celebration of the California gold rush). 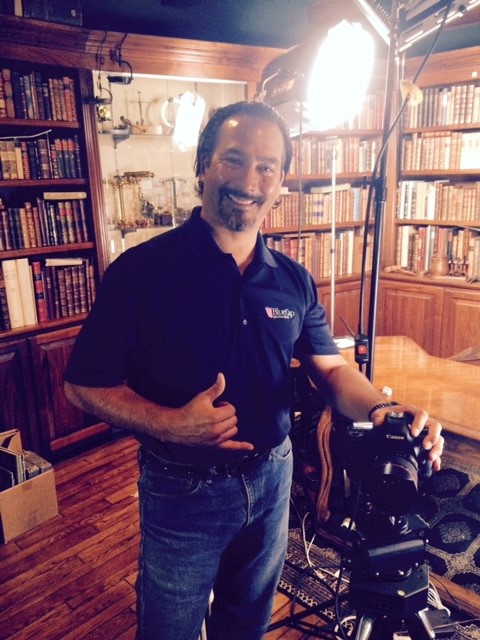 Bryan in now working on the ‘final cut’ (love those film maker terms). Not only will it be useful to the next owner of the collection (NO, NO, NO, he is NOT selling the collection just yet) but should “the big one’ happen in our lifetime it will serve the insurance claims adjuster (not that those people would ever give you full value for anything, regardless of how irreplaceable it may be – sorry any insurance people who are collectors!).

So.o.o. the catalog is nearly complete, the film is made – next up: Wayne would like to do a book on the 100 most important antiquarian books on mineralogy (sort like the Zamorano 80 list of early California works). This should be in the works next year.

A side story I think is so funny and book collectors will appreciate the dry humor: Larry Conklin, who made his own mark with rare books, once asked someone who had visited our house “just how many copies of Sowerby’s works does Wayne have anyway?”. The visitor paused and told Larry “you know, I’m not sure but as you enter one room the carving over the door says ‘The Sowerby Room’, and the sigh from Larry was priceless. Fortunately, “Lovable Larry” has discovered a sense do humor over the years.

It is difficult to find anything that Wayne does not have these days, but last year he was able to acquire one book that he has been chasing for over 25 years but the owner would not let it go until now. The Sir William Hamilton work on the eruption of Mount Vesuvius Camp Phlegrael, 1776, was icing on the cake. The last one offered was in the French auction many years ago (on the cover of the catalog) which fetched about $180,000 and Wayne’s copy is better!